The OBi202 2-port VoIP phone adapter with router supports up to 4 VoIP services, including Google Voice™ with network and application extensibility via integrated USB port.

CAMPBELL — 18 April 2012— Obihai, the customer-top-rated manufacturer of VoIP phone adapters for SIP and Google Voice™, has just released the OBi202 two-port VoIP telephone adapter with integrated router and USB port. The OBi202 is for sale now at www.Amazon.com and available to service providers for mass-deployment. With the previously announced End-of-Sale for the Cisco-Linksys SPA2102 and PAP2T, the OBi202 is well-equipped to replace these highly-regarded ATAs for both value added reseller (VAR) and service provider deployments.

The OBi202 is targeted at Internet phone service providers world-wide, as well as power-users of Google Voice™ and literally hundreds of Bring Your Own Device SIP services. The OBi202's innovation and sophistication in the areas of speech technology, voice traffic prioritization, call management and ease of set-up are catalysts that will ignite excitement among consumer and small business users who want the best product for their VoIP communication needs.

“We are extremely excited to bring the OBi202 to market and support all the customers using the device,” said Jan Fandrianto, President and CEO of Obihai Technology, and inventor of the first VoIP phone adapter. 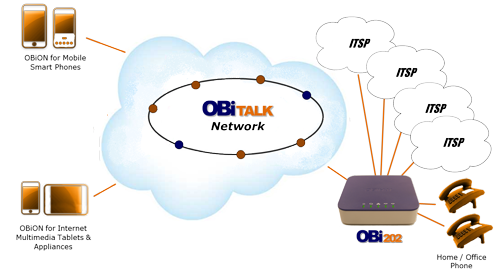